Out with the old, in with the new: keeping the artist in me on target. 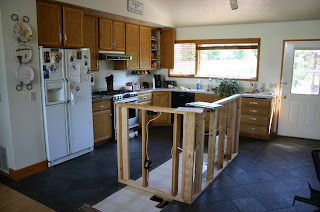 Monday, September 21;  Demolition day and the beginning of the project. What's seemed like years has in reality been 6 weeks.

Hours after they ripped out the island I received a phone call, the cabinets will be two weeks later than expected. Perfect!

We had running water and appliances so it was sort of like camping. Our fast food bill rose significantly in those few weeks.

As the time drew closer and as we coordinated with the plumber and electrician, we pulled the rest of the cabinets, sink and dishwasher.

I started experimenting with paint colors. Being an artist, this is where I can go a little crazy. I over think everything and worry about things that the normal homeowner would probably never consider. 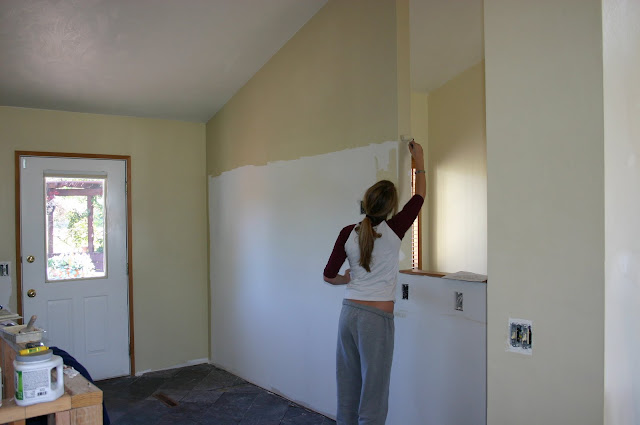 I settled on a taupe that was neutral (or appeared so) and would warm up the area.

We moved the working kitchen to the laundry room in the basement. The fast food budget once again rose. And, the kitty litter box, also housed in the laundry room, received significantly more attention than ever before.

Every day a little more progress was made.

October 12, cabinets arrive. As it turned out, they were only delayed one week. Now we're back on track.

October 13, cabinets are installed. The transformation was uncanny. The rich dark color was a wonderful change from the standard 90's golden oak. Being that this was ultimately an investment decision, I was careful not to go too modern, but definitely update the look. 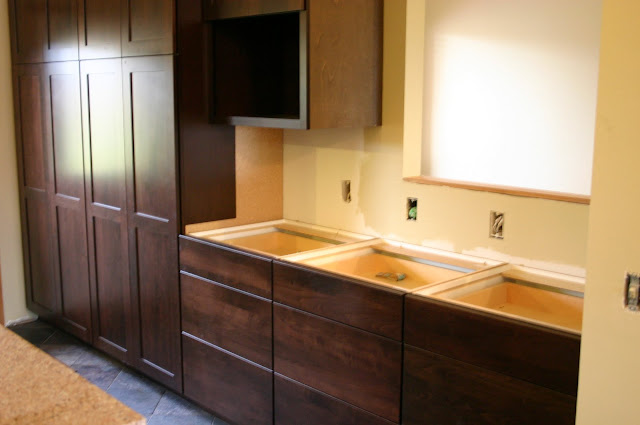 It was necessary to pick materials that would have a wide enough interest. But, it was also important to keep the integrety of the house style and consider who the typical buyer for a home in this price range would be and the quality they would expect.  I refrained from choosing a completely modern look. I love the look of the new sleek clean door front with the long, nickle handles. But, I'm not in downtown Seattle. It's Pullman. I have to appeal to a wider demographic than that. I compromised and went with a Quaker/craftsman cabinets that are beautiful, clean lined while having historically proved the test of time. 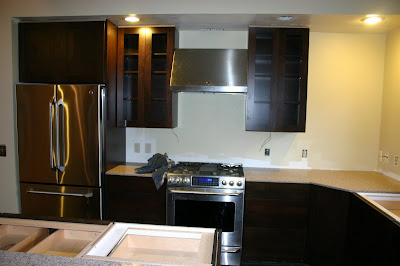 The color is probably my biggest risk, dark sienna/espresso.  My kitchen is part of a large great room. Since the room is so large, I can not only justify the darker wood but believe it's necessary to update the feel of the space. It also ties in with the slate in both the kitchen (as you can see above) and the slate in the living room that's in plain view.

I'll post more on Monday. I've got to get some yardwork done while the sun is still shining. -Kary 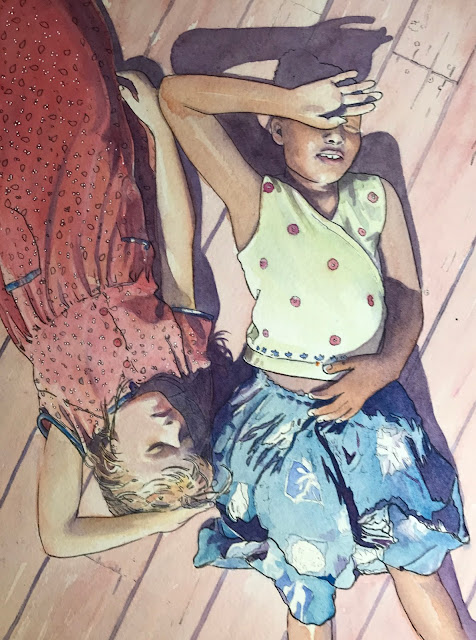